BLACK PROFILES in COURAGE: A LEGACY of AFRICAN-AMERICAN ACHIEVEMENT by Kareem Abdul-Jabbar and Alan Steinberg 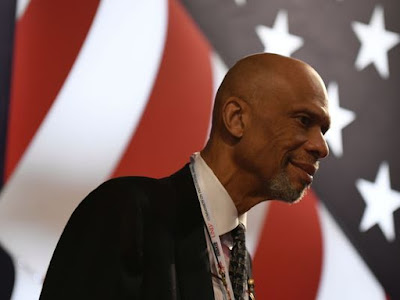 Kareem Abdul-Jabbar presents a look at American history through a different lens than you usually see. This book follows from even before the arrival of Columbus through Rosa Parks receiving her just accolades in the 1990's. His underlying theme, as explained in the title, is that African-Americans have been contributing in important ways the entire time, but they are often "whitewashed" from history.

Abdul-Jabbar is best known for his time as a top-level basketball player. But he is not just a jock (if you are a fan, you know he never was JUST a jock) - he is also an amateur historian and quite thoughtful. Clearly, he was inspired by the book Profiles in Courage by John F. Kennedy but this book is not structured in any way like that classic.

The book starts with its weakest proposition from a historical perspective. There are historians that assert that African peoples were heavily involved in Mesoamerican history (Mayas, Aztecs, Olmecs) and Abdul-Jabbar agrees with them. While it is interesting to ponder, I think that, at best, it can be said that there maybe some influence there - or maybe not. We cannot be definitively sure, even if there are tantalizingly suggestive clues, due to the lack of historical records on both sides of the Atlantic and a genetic record that has been muddled by intermixing for the last 500+ years.

But, the rest of the book is really quite strong. I very much enjoyed his biographical sketches of Crispus Attucks, Harriet Tubman and Frederick Douglass, especially Crispus Attucks. Abdul-Jabbar makes a solid case that the people he discusses should be part of everyone's history books, not just special themed history books.

This book can be found on Amazon.com here: BLACK PROFILES in COURAGE: A LEGACY of AFRICAN-AMERICAN ACHIEVEMENT by Kareem Abdul-Jabbar and Alan Steinberg.
Posted by DWD at 9:37 PM

Originally published in 2002. As the title states, Clint Johnson has found 50 people from the Civil War (25 from each side) who played a...