Published by Oni Press in February of 2019.

The phrase The Long Con has a double meaning this story. Traditionally, a "long con" is a long-term swindle that is being pulled on someone, like a long-term investment fraud.

Meaning #1: In this graphic novel, The Long Con is the biggest Pop Culture Convention in the world. It has been an annual event for 50 years and it lasts a long time. Five years ago, it was location of ground zero of a horrible (unspecified) "cataclysmic event" that destroyed everything in a 50 mile radius. Everyone assumed that the convention hall was destroyed.

Surprise! The convention hall survived! The people inside it survived! And...the attendees are still having the convention - 5 years later! (thus making this a really long convention). They believe that the rest of the world was destroyed because if you head out for 50 miles in any direction it's all obliterated. 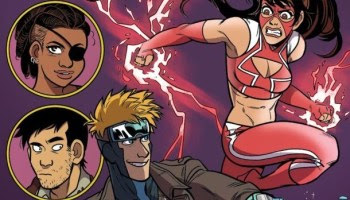 Well, to be fair, they are not really having a traditional convention any longer. They are living in a pop culture little world because they are, well, cosplayers, fanboys and supergeeks (I mean that as gently as possible).  Their world is broken up into fan bases - and they are literally fighting for control of what they think is the only bit of livable real estate on the planet - the convention center.

No real-life TV shows, movies or comics are actually mentioned but there are stand-ins that any comics or sci-fi fan would immediately recognize. There's a Star Trek-type show, gritty comics, cosplayers everywhere, commentary on pointless "boob window" outfits (like D.C. Comic's Power Girl), a guy with a t-shirt about how someone "shot first", creepy comic book guys and D-list celebrities.

I really enjoyed this graphic novel. The art was easy to follow, the characters were likable and the world of The Long Con was interesting to explore. This graphic novel would be an interesting basis for a video game or a board game. I am going to keep an eye out for more books in this series.

I rate this graphic novel 5 stars out of 5. It can be found on Amazon.com here: The Long Con.
Posted by DWD at 2:52 PM