This collection is comprised of 13 stories (and one intro track) culled from 31 years of NPR radio stories (1979-2010). Most of these stories have depth but not all are equal.

I was profoundly moved by a story called "My So-Called Lungs" featuring a young woman starting college while struggling with cystic fibrosis. It was engrossing on multiple levels and my high school-aged daughter and I were captivated by the woman's honesty, grace and humor in the face of inevitable death.

On the other hand, the story "Death of a Child: Losing Adam", featuring a child who was dying from a terminal illness just felt intrusive and maudlin.

The interview with George Foreman was interesting and quite enjoyable, although NPR being NPR, they found a way to bring a downer note to it by tying the George Foreman grill into it and interviewing homeless people who used it as a cooking appliance of last resort.

The collection ends with a great story, undoubtedly exaggerated, about 2 friends hitch hiking across Nebraska in the 1970s. "Hitching a Ride with Junior McGee" is a great short story told well and is a good way to finish the collection.

Note: this collection is up and down, but the strong stories are very, very strong and are worth listening to.

I rate this collection 4 stars out of 5.

This audiobook can be found on Amazon here: NPR Classic Driveway Moments: Radio Stories That Won't Let You Go

Jack, the apprentice Bard from late 8th century Saxon England and his difficult friend Thorgil, the Viking girl, continue their adventures in the conclusion to their trilogy (although there is an opening for the series to continue...).

As with the other books in this series, Jack and Thorgil come into contact with a host of fairy tale creatures such as Mermen and Mermaids, Hogboons, Half-trolls and even a Viking god as Nancy Farmer demonstrates the depth of her research into European mythology. Jack and Thorgil join the bard on a quest to correct a horrible wrong done by Father Severus on a Mermaid  years ago (the Merpeople are called Fin Folk in this book) that has caused her to become a fearsome ghostly creature that kills and spreads disease and destruction.

In this book, the adventure returns to the form of the first book and heads out to the open sea in Viking long boats. But, sadly, this book is much more like the second book of the series than the first. The book quickly deteriorates into a series of rather pointless confrontations with random monsters that are the unfortunate by-product of Nancy Farmer's meticulous research. Rather than develop a creature and flesh it out as a character (which the first book did so well with the Trolls and their world) this book just throws the out as a series of obstacles that Jack must overcome in his quest. It reminded me of the worst of the adventures that I helped create when I played Dungeons and Dragons in Junior High and High School.

The best parts of the book are when Jack struggles with the immense changes his world is undergoing. Christianity is a new arrival and Jack struggles with blending his Christian worldview and his pagan worldview.  He struggles with a Christianity that allows Father Severus to be so cruel. But, he has the example of Father Aidan who exudes a much more subtler style of Christianity and who comes so much closer to living up to the ideals of Christianity. Jack respects those ideals and espouses them at a critical moment that I cannot detail here because of spoilers. But, he is also a practitioner of magic that Christianity condemns (or at least discourages, depending on the location).  He also struggles with his friends the Vikings - fantastic friends, loyal to a fault who will gladly slit your throat and sell your sister into slavery and the Viking brand of paganism that glorifies death above all.

As I listened, I was struck by the idea that the best parts of the book were constantly being subverted by yet another mythical beast's arrival making the book much longer and all the poorer.

Gerald Doyle's narration was extraordinary, as it was in the other two books of this trilogy.

It can be found on Amazon here: The Islands of the Blessed (Sea of Trolls Trilogy)

Click on the Nancy Farmer label below to see the other reviews of the books in this trilogy.

CHINESE TURKESTAN: A PHOTOGRAPHIC JOURNEY THROUGH an ANCIENT CIVILIZATION by Ryan Pyle

Published by Ryan Pyle Productions in 2014

Photographer Ryan Pyle has traveled extensively throughout China and India, Luckily, he brings his camera along and takes plenty of pictures.

This book focuses on the Xinjiang Uyghur Autonomous Region, the most trackless part of the old Silk Road that has connected Europe and China off and
on for well more than 2,000 years. The Uyghur are Muslim and their large but sparsely populated homeland lie at the crossroads of Islam and secular Communist China. Their territory touches Tibet, Pakistan, Kyrgyzstan, Kazakhstan and Mongolia. 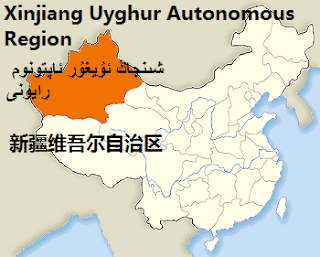 What Pyle calls Chinese Turkestan is often at odds with the rest of China. The Uyghur are Muslim while China actively promotes secularism. China seems bent on modernizing as quickly as possible but the Uyghur sometimes seemed locked in the past. As Pyle notes in his introduction, "There were many occasions when I stood in a crowded marketplace, enveloped in the early morning haze of coal smoke amidst the cacophony of livestock traders, noodle, bread, and dumpling makers, blacksmiths, knife and carpet sellers, feeling like a time-traveler transported to some bygone era."

Pyle does note the modern world's encroachment with many of his pictures. The first picture in the main body of the book is that of a family playing in one of those grotesque plazas with statues extolling some virtue of an idealized and devoted citizen who is all-too-happy to live for the state that Communist countries excel at creating.

But, most of the pictures have a National Geographic-type feel to them. They show regular people doing regular jobs pretty much they way that they have been done as long as anybody can remember. Pyle has chosen to shoot all of his pictures in black and white. Black and white can be powerful and it often is in this collection. But, I found myself wishing for just one color photo of the landscape so that I could get a better feel for their environment.

The book can be found here on Amazon.com:
Chinese Turkestan: A Photographic Journey Through an Ancient Civilization

Note: I received a copy of this book for free in exchange for an honest review.

NPR's Driveway Moments collection are called "Driveway Moments" because the idea is supposed that the stories are so good that the listener sits in the driveway and listens to the end of the story when he/she gets home rather than just turning off the car and going on into the house.

In this collection, the emphasis is on dogs and this collection covers all sort of dogs. From homeless chihuahuas in Los Angeles  to massive sheep dogs in Turkey. There are celebrity dogs, blind dogs, war hero dogs and dogs that go to church. We also hear from two different dog trainers, learn about DNA testing for dogs and learn about a mother dog that adopted a nursing tiger Cub.

The collection is up-and-down but the strong stories are good enough for me to rate this collection 4 stars out of 5.

Should be called "Funny People in Rather Boring Interviews"

This collection of performances from NPR's vast radio library is the second volume of "Funniest Driveway Moments." They are called Driveway Moments because the idea is supposed that the stories are so good that the listener sits in the driveway and listens to the end of the story when he/she gets home rather than just turning off the car and going on into the house.

But, most of this 2 CD set should be called "Funny People in Rather Boring Interviews."

The collection starts out with a run-of-the-mill interview with Joan Rivers (Sorry NPR but discussing her husband's suicide is just not funny) and the most boring interview with Harry Shearer that I have ever heard. There was an interview with Harold Ramis about how to write comedy that was vaguely humorous and I was really beginning to wonder if this would ever pick up.

Thankfully, a clip from "Wait Wait...Don't Tell Me" came on featuring Brian Williams. Despite the recent controversy concerning Williams, this is the best segment of the first CD.

Carol Burnett and Tim Conway come through at the beginning of the second CD and after several slow cuts, another "Wait Wait...Don't Tell Me" cut comes in and picks things up. An interview with Jane Lynch is not terrifically funny but at this point I was glad to settle for interesting and a couple of chuckles. The second CD just sort of eases its way out and I was glad to see it go.

I am a huge fan of NPR's Driveway Moments series but this set is just not all that funny. If you want an NPR-based laugh, find any of the "Wait Wait...Don't Tell Me" CD sets (The Brian Williams track is on one of them) and have a laugh. This was a disappointment.

Published by Berkley Windhover in 1974

Bruce Catton was the most famous Civil War historian of his era and mastered the art of writing narrative history for the masses. I freely admit that I am an unabashed fan of Catton. I am quite sure that he kick-started my interest in the Civil War that has caused me to fill my shelves with over 100 Civil War books.

Catton tells the story of Gettyburg in slightly more than 100 pages His approachable style is in full display here. For example, his description of Confederate General A.P. Hill: "...a heads-down slugger always willing to take a blow in order to land one." (p. 20)   No one is better at telling a Civil War story than Catton and Gettysburg is the single biggest story of the war. He knows how to keep the story moving but to add just enough detail to make it feel like a special re-telling.

The book is full of great maps, illustrations and photographs and is well worth the time of a student of the Civil War or someone who is simply interested in learning more about Gettysburg.