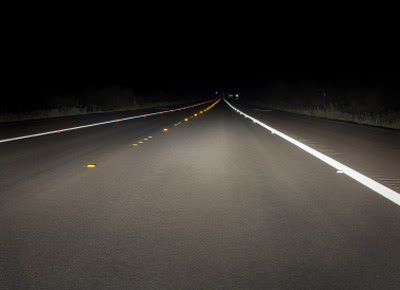 Jack Reacher is stuck in Nebraska. He is hitchhiking his way across the country to Virginia to physically meet the woman he met over the phone in 61 Hours. He has having a hard time getting a ride, though, because his nose is broken and it is taped over with a shiny piece of silver duct tape and it makes his already-menacing look even more menacing. He finally gets picked up by two men and a woman in a sedan and they are off to Chicago on the lonely interstate in the middle of the night.

But, things don't seem right to Reacher. The woman is uncomfortable, he has caught the most talkative man in two obvious lies and they get stopped by two different roadblocks. Something is up.

Meanwhile, the action flashes back to a old small town Sheriff and a young female FBI agent who are trying to coordinate a search for two men who are suspected of killing a person with ties to the State Department and a missing cocktail waitress. So far, the suspects have slipped through two different sets of roadblocks...

I was torn by this book. The opening drama of Reacher being trapped in the car with the bad guys was actually quite interesting. The interplay between the FBI agent and the sheriff was excellent. But, the way Reacher figures it out the exact situation (or, at least close enough for the early part of the book) is stunningly unbelievable. The locale of the climactic scene, when it come to pass (no spoiler, I promise) is a play off of the situation in another book that it makes me wonder if Lee Child had come up with two possibilities for the other book and decided to recycle his previously discarded choice in this book.

On the other hand, Reacher's funny comments are plentiful and spot-on.

Dick Hill does a great job reading Jack Reacher. He gets the pacing of Lee Child's writing style and does a great job with accents and even gives Reacher a stuffed up nose sound the entire book because of his broken nose.

I rate this audiobook 3 stars out of 5 for too many giant leaps of logic for Reacher and the "recycled" location from an earlier book.

This audiobook can be found on Amazon.com here: A Wanted Man by Lee Child.
Posted by DWD at 9:49 PM