This is one great book.

The Red Heart is based on the true story of Francis Slocum, a 4 year old Quaker girl who was kidnapped by Delaware Indians in the 1770s on the Pennsylvania frontier near Wilkes-Barre. (There are recreation areas named for her in both Pennsylvania and Indiana)

It is also the story of her family's 60 year search for her across the Midwest and even into Canada.

It is also the story of the relentless westward movement of the Americans and how the Indians dealt with it.

The reader also gets a fantastic lesson on daily life among the Delaware and Miami Indians.

If you're a Star Trek: The Next Generation fan you'll remember the episode entitled "Inner Light" in which Picard is "attacked" by the alien probe from the long-dead world that makes him live an entire lifetime among their people in his mind in just a few seconds so that their way of life will never be forgotten. (It's the one where he learns to play the little flute-type instrument). Well, this book reminds me of that - you are drawn into this woman's life and initiated into Indian culture as she is. You learn along with her. You grow up with her, feel her disappointments and joys and her confusions as she learns that her white family is searching for her (should she seek them? should she run? Would it be best to take advantage of her white skin and abandon her Indian family as the times get harder and harder?) 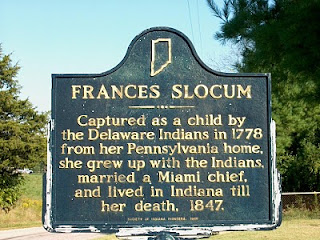 I have a few quibbles with the book but those are dwarfed by Thom's overall accomplishment. Honestly, at the end of the book, when Francis Slocum dies, I felt as though a longtime friend who'd lived a wonderful and fulfilling life had died - and that is the greatest compliment I think I can give it.

This book can be found on Amazon.com here: The Red Heart.