SUPERMAN: THE COMING of the SUPERMEN (graphic novel) by Neal Adams 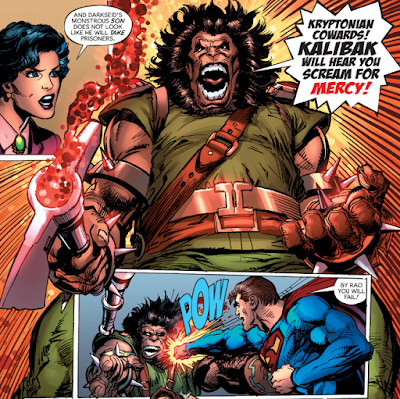 A group of men dressed like Superman crash land in an older couple's Iowa cornfield. They then fly to Lex Luthor's corporate headquarters and engage in a fight against an invasion. It is Darkseid's soldiers coming through a red "tunnel" called a "boom tube". The boom tube allows people to travel from one planet to another instantaneously - like a tunnel between worlds.

But, these three new Supermen are not very good at fighting the bad guys are are fairly confused about how to use their super powers. Turns out they are three Kryptonians that have come to defend Earth from an invasion of Darkseid's troops led by his oldest son, the immortal Kalibak, in the hopes that Superman will go to Krypton to deal with a Darkseid invasion.

Meanwhile, Superman is in the Middle East saving civilians in a war zone. Among those civilians are an orphan and his dog. Superman is stopped by a time-controlling alien that looks like a winged demon and told that he needs to take this boy and his dog home and take care of them.

So, Lois and Clark take this boy in and immediately farm him out to a nanny.

If you noticed the contradiction in the second paragraph (Superman, please defend Krypton from Darkseid's invasion while ignoring Darkseid's invasion of Earth led by an immortal thug that can rip down buildings with his bare hands) then that puts you ahead of the author and illustrator.

This collection of six comics features A LOT of yelling (giant text that fills up chunks of the page), cursing from Superman, almost everybody getting punched in the face so hard that it knocks them out and great lines like this gem from Superman as he fights Kalibak: "RETURN THE BOY! Return the boy, you worthless animal! Nothing requires you. You make our existence ugly with your presence. Give me the boy or your life is forfeit."

The lesson here is that when Superman gets mad, he will kill and he will do it sounding like he is participating in a bad session of Shakespearean improv. I can excuse goofy lines in improv - it's off the top of your head. This mess was actually written out, proofread and inked in over a period of time.

The drawings are actually not bad at all, but the layout is haphazard. Sometimes it goes all of the way across the two pages, sometimes it goes down the side of the page. It was not uncommon to have to re-read the pages just to figure out what order that it was supposed to be read.

This may very well be the worst graphic novel I have ever read. I rate it 1 star out of 5. It can be found on Amazon.com here: SUPERMAN: THE COMING of the SUPERMEN by Neal Adams.
Posted by DWD at 5:50 PM