ALL the DREAMS WE'VE DREAMED: A STORY of HOOPS and HANDGUNS on CHICAGO'S WEST SIDE (audiobook) by Rus Bradburd 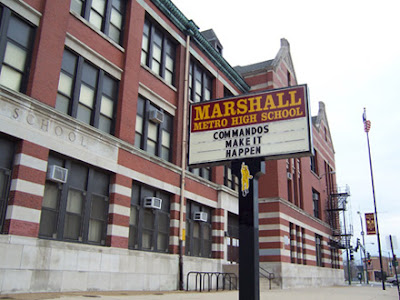 The book centers on Marshall High School and its basketball program. Perhaps you have heard about the wave of gun violence that has swept through Chicago's South and West sides, earning it the nickname "Chi-raq" because it is reminiscent of Iraq during the bad old days of The Surge at the end of the Bush Administration. Marshall lies in that violent zone.

Marshall is an old school, well over 100 years old. It prides itself on being a family and its basketball programs, even with declining enrollments. Shawn Harrington exemplifies that sense of family. He is a graduate of the school, he went away for school and came back with his degree to be an aide in the special education department and to help with the boys basketball team. By all accounts, he was great at both things. He connected with his students and his players and went above and beyond for them because he believed in the power of the "Marshall Family".

Until one fateful day when Shawn Harrington was shot in a case of mistaken identity - another casualty in the ongoing tragedy. He leaned across the body of his daughter to protect her and in the process was shot in the back and left paralyzed.

This is where the author, Rus Bradburd comes in. Years before, Bradburd was an assistant basketball coach at New Mexico State University but he used to scout high school teams in Chicago. He recruited Harrington to play at New Mexico State and Harrington was successful - until he had a knee injury. Bradburd agreed to cut Harrington from the program - something he is not proud of. But, Harrington went to a smaller school, played ball and, most importantly, graduated.

Nevertheless, Bradburd felt bad about the way Harrington left New Mexico State and saw this as an opportunity to do the right thing and make amends. He began to call, to write, to cajole and talk to anyone about Shawn and his amazing spirit and his desire to continue his work with the kids at Marshall. Ironically, he couldn't continue as a special education aide because Marshall was not retrofitted with an elevator or ramps to get to the upper floors - a basic requirement of the Americans with Disability Act. No one at Chicago Public Schools sees this oversight as a problem so Harrington is left to fend for himself and maybe figure out what else he can do.

Harrington gets stuck in the bureaucratic maze of the Chicago Public Schools and the healthcare system (how do you get physical therapy that you need to go back to work when you have no money to pay for it because you don't have a job because you need to get to the physical therapy so you can go back to work?) and Bradburd does what he can to help. He bothers so many writers to write about Harrington that eventually one of them tells him to write the story himself - the genesis of this book.

But, the book becomes more than just Harrington's story. Harrington is not an isolated case in a city that had more than 4,000 shooting victims in 2016. That violence strikes Marshall again and again. Bradburd tells the stories of other players who were struck down. Over and over the mantra is for young people to get out of Chicago so they can have a chance. Harrington left - but he came back to help his Marshall Family and he paid the price.

Ultimately, the book is a tragedy. You know that the bureaucracy will eventually close Marshall. You know that the violence will continue. But, there is comfort knowing that good men like Shawn Harrington are out there, providing a powerful example and refusing to give up. And, if they can bring in enough friends like Rus Bradburd, maybe...

I was struck by this audiobook because I teach in an urban high school in Indianapolis. While our situation is not nearly as bad as Chicago's, we have our moments. For example, a year ago a former student of mine was paralyzed by a bullet shot at another student from my school. It is very common for my students to wear R.I.P. t-shirts with a picture of a young person who was killed. I think Bradburd did a solid job of describing how these neighborhoods have been weakened and how the charter school movement and foolish decisions by the Chicago Public Schools helped. It's not a pretty picture.

The audiobook was read by Donald Corren. He did a great job and I plowed through this audiobook in just four days. It was an excellent book and I rate it 5 stars out of 5. It can be found on Amazon.com here: ALL the DREAMS WE'VE DREAMED: A STORY of HOOPS and HANDGUNS on CHICAGO'S WEST SIDE by Rus Bradburd.

Please check out this book as well: AN AMERICAN SUMMER: LOVE and DEATH in CHICAGO by Alex Kotlowitz.
Posted by DWD at 12:17 AM