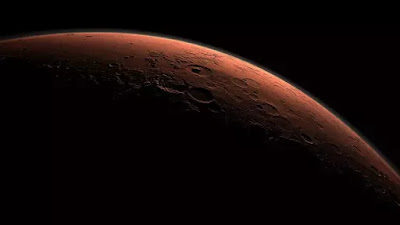 A Mars colony has been established by four separate factions: China, Russia, America and Eurasia (Europe, India, Israel, Japan, and more). The groups work together, but not always smoothly but they are building a successful colony.

Suddenly, everything is thrown into a tailspin when the major world powers begin firing nuclear weapons at one another and 15 cities are obliterated - and each faction of the colony has suffered losses. And...there's little chance that there a re-supply ship coming any time soon.

The colonists have to figure out if they can trust one another despite the nuclear strikes back on Earth and they need to figure it out soon because Mars is a tough enough place to live when everything and everyone is working well, it's really tough when no one trusts one another.

And, it gets even tougher when they finally figure out what is really going on...

This is a throwback kind of sci-fi book with a lot of effort going into how a Martian colony would actually work. Sometimes that is great, sometimes it drags. On a positive note, there are lots of plot twists that move the story in unexpected ways.

This book can be found on Amazon.com here: RETROGRADE by Peter Cawdron.

Note: I received an advance reading copy of this book through the Amazon Vine Program.
Posted by DWD at 11:02 PM