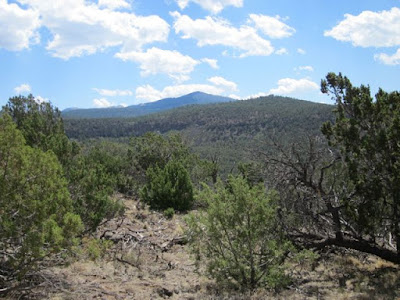 Sixty-two year old Undersheriff Bill Gastner is recovering from heart surgery. He has been told to get out and exercise more and to get away from work. You see, Gastner has a lot of bad habits when he works. He doesn't sleep, he gets involved in things that get him hurt and he eats large, spicy burritos.

So, Bill decides to go on a camping trip and visit a former colleague, Estelle Reyes-Guzman, who has taken a job in the sheriff department of a different county in New Mexico - up in the mountains. But, while he is trying to sleep in a campground he hears sirens and sees lights so he decides to go check it out.

Soon enough, Bill is working with Reyes-Guzman and investigating a murder, looking into a smooth-talking hippie-type who quotes the Bible and brandishes a gun and eventually ends up questioning a priest.

Heck of a vacation, huh?

This was an interesting change of geography for the Posadas County Mystery series - away from the mostly flat deserts of the border area and into the desert mountains. Rusty Nelson's reading of the book was pretty good, except for any time he has to read Spanish.

I rate this audiobook 4 stars out of 5.

This audiobook can be found on Amazon.com here: Bitter Recoil by Steven F. Havill.
Posted by DWD at 11:42 PM