BRIMSTONE(Virgil Cole and Everett Hitch #3) (audiobook) by Robert B. Parker

In the third book in this series, Virgil Cole and Everett Hitch do a lot, but at the same time I felt like this book went nowhere and made a lot of noise doing it.

In short, Cole and Hitch begin the story looking for Cole's ex-girlfriend Allie French. You have to have read the first two books to even begin to wonder why Cole wants to find this woman again. They find her in the worst brothel in the worst part of town and rescue her and a fight ensues.

They all leave town and eventually find a town that needs two deputies and they take the jobs. In the town there are multiple saloons, including one led by a former army officer who was cashiered from the service because he led his men on an attack on an Indian village and killed old people, women and children but no warriors.

There is also a church in town with a curious brand of Christianity led by a megalomaniac who believes he is communing with God and arms his deacons and practices a "muscular Christianity". Allie is drawn to the church, the church sets out to close the saloons and there are multiple murders by a rogue Indian on the fringes of town.

Virgil and Everett have their work cut out for them. 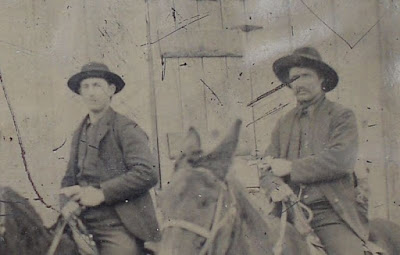 I have listened to the first three books in this series in the last month and perhaps I have listened to too many to fast. This book just did not have the punch of the last two. In fact, this book just seemed like a lot of half-developed themes thrown into a big pot and stirred around. The first book, Appaloosa, was a tight drama that built along two themes - the friendship of Cole and Hitch and Allie's need to be with the biggest dog in the pack. The second book was all about Cole working out how he can be an enforcer of the law even though he has broken the law.

The only consistent theme in this book was the redemption of Allie, and that was not done particularly well. There was an undeveloped anti-religious message (actually two themes - is religion real and are religious leaders to be trusted), there was a look at the raw deal that a lot of Indians got and then there was just your typical western shoot 'em up stuff. Plus, even though there was a lot of shooting, kidnapping and general mayhem, it seemed like there was an incessant amount of talking in this book. The same conversations that were held in the last three books in this series plus in most of the Spenser books. Maybe if I had spaced out my listening a little bit it wouldn't have been so obvious.

Once again, Hollywood actor Titus Welliver read this book, as he did for the other two. Once again, he did a good, solid job. I think he voices Everett Hitch especially well.

This audiobook can be found here on Amazon: Brimstone