Lincoln Laughed: The Wit and Humor of Abraham Lincoln (audiobook) 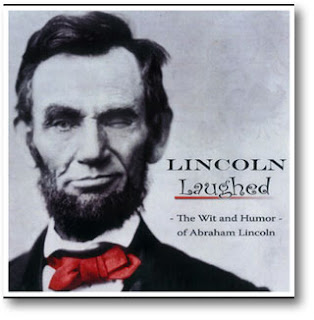 A different look at our most written-about  president

Everyone knows the facts about Lincoln - the 16th president, the Civil War, the Emancipation Proclamation, the Gettysburg Address, his assassination. But, do you really know Lincoln?  This CD offers a completely different look at the myth that the man has become by offering a look at his humorous side.

Lincoln was a master storyteller and he often told his stories to prove a larger point. There are plenty of those types of stories on this CD.  Sometimes he just told stories to disarm an audience - the editor of this collection notes that Stephen Douglas feared the ability of Lincoln's homespun humor to win a crowd more than his arguments. Lincoln's stories were known to persuade juries and sometimes they were just for fun. His wife noted that Lincoln's sense of humor - his quick smile and laughing eyes were never present in his photographs - he always looked so solemn, serious and even sad. This CD goes a long way to presenting the Lincoln that his friends and colleagues knew.

This CD is available is only available online from the company that produced the CD, a company called Tellens (link here) although I have found references to this CD being sold at Lincoln-related historical sites. Mine was purchased at the Indiana State Museum.

Note: there are two small historical errors in the presentation. There was no Lincoln-Douglas debate in Bloomington, Indiana. Instead, the reference would be to a Bloomington, Illinois. But, there was no Lincoln-Douglas debate there, either. Instead, Douglas spoke and Lincoln came from the crowd with a series of prepared questions and comments to challenge Douglas in an effort to set up more formal debates later on - those later debates were the Lincoln-Douglas debates. The second mistake involves mixing up the general who noted that all of his dispatches came from his "Headquarters in the Saddle." The narrator claims it was Joe Hooker, but it was John Pope. Lincoln joked, "General Pope has his Headquarters, where his Hindquarters ought to be."
Posted by DWD at 12:44 AM