Bland Ambition: From Adams to Quayle - the Cranks, Criminals, Tax Cheats and Golfers Who Made it to Vice President by Steve Tally 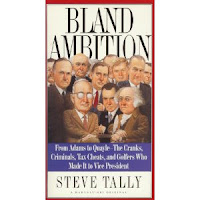 An irreverent look at the vice presidency

In Bland Ambition: From Adams to Quayle - the Cranks, Criminals, Tax Cheats and Golfers Who Made it to Vice President

, Steve Tally looks at America's vice presidents and gives us the inside scoop on each of these men's foibles and character flaws. The chapters are short and sweet and hilarious!

For the researcher paper writers out there, Tally's work would be inappropriate to use as the main source of your information, but it would make a fantastic book to add that little bit of extra to make your paper more interesting to read!

This was truly an enjoyable read. I borrowed mine from the library but I'm adding it to my wish list because I want to have a copy of my own!