Star Wars, Episode V: The Empire Strikes Back (The Original Radio Drama) was created for National Public Radio and originally broadcast in 1993. It features several members of the original movie cast including Mark Hamill (Luke Skywalker), Anthony Daniels (C3PO) and Billy Dee Williams (Lando Calrissian). John Lithgow steps in and does a strong job with Yoda. Vader suffers with Brock Peters as the voice - not because he did anything wrong, but because he is just not James Earl Jones.

The story is well told and has the added bonus of being able to take a little more time to expand certain scenes. For example, what do Luke and Han talk about after Han rescues him on Hoth and they wait for morning in an emergency tent? On the other hand, I don't know if anyone can really follow the radio drama if they have not seen the movie? In my mind, images from the movie were constantly being played - Lando's flowing cape, the bounty hunters all lined up before being sent out by Vader, the "cave" on the asteroid. I don't know if the radio drama would be able to create similar scenes in the mind's eye or not. 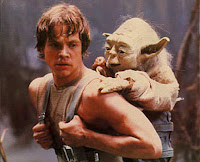 There is one major drawback - the are only 2 CD "chapters" or tracks on each CD. This is no big deal if you are listening in the car, but if you pull that CD out, you have got to do a lot of searching to find where you were. Each track is the complete drama as aired, including about 3 minutes of introduction, theme music and a reading of the cast members. It makes for slow listening when you've hear it for all 10 episodes.

I rate this radio drama 4 stars out of 5.

This audiobook can  be found on Amazon.com here:  The Empire Strikes Back (Star Wars)